How can I support Palestinian Christians? 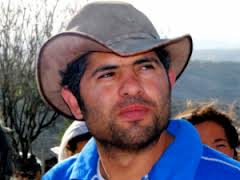 Yesterday I met Daoud Nassar, and I would like to introduce you.

“I am a Palestinian Christian farmer,” Daoud says. There are very few of his kind left.

His family’s land lies six miles southwest of Bethlehem, 100 acres that his grandfather purchased in 1916. The family has owned the land through four occupations: the Ottomans, English, Jordanians, and now Israelis. Since 1991 Daoud and his family have been in a constant legal battle to keep their land.

The Israeli government tries every possible method to annex the land, as it is the only hilltop left in the area which does not have an Israeli settlement. The government has cut off electricity and water, has barricaded the entrance to the land, and has sent demolition crews multiple times. Israelis settlers have entered with guns and military equipment, and have uprooted hundreds of olive trees.

Daoud and his family continue to live on the land. They replant new olive trees. They generate their own solar power. They collect rainwater in cisterns. Because the Israelis refuse to allow them a permit to build, they live in natural caves on the land. 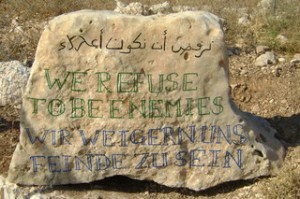 This is the stone at the entrance to their property. It proclaims their motto: “We refuse to be enemies.”

The motto is written in multiple languages, including Hebrew.

They vow three things: never to act in a violent way, never to sit down and be a victim, and never to leave their land.

I am thinking about what fortitude it takes to plant olive trees in this situation. Olive trees require ten years to become productive.

In response to hearing Daoud’s story, I have decided to make one small change in my behavior: I will buy Palestinian olive oil. It makes a wonderful hostess gift. Instead of bringing the usual bottle of wine, I will bring a bottle of olive oil. A small thing, perhaps, but it is something I can do. 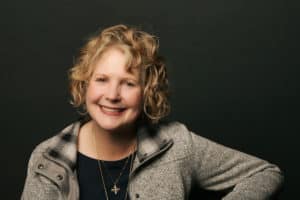